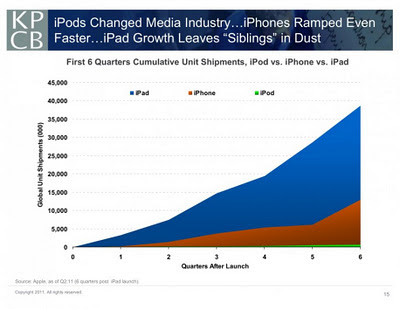 Apple (Nasdaq: AAPL) disappoints Wall Street in their latest earning call beating guidance but not matching street expectations.  After looking at Mary Meeker's latest Awesome Web 2.0 presentation about the "State of the Web", this slide struck me the most as I listened to the Apple earnings call.

Apple's stock has risen over the last few years due to their close business relationships with the carriers and booming iPhone sales.  Have iPhone sales topped out due to insanely booming iPad sales?   iPads carry lower margins for both Apple and the carriers and have a incredibly better user experience than an iPhone.  Once you start using a tablet or an iPad you might only use your smartphone for tethering and essential messaging functions.  No longer are the thousands of iPhone applications relevant as the iPad has become the focus of my WiFi content data usage experience.   And yes its FREE!

Apple investors have also been expecting the iPhone 5 which technically is 2 years behind the curve on 4G standards. LTE and 4G phones have been on the market for a long time and Apple has not even announced the iPhone 5 yet as it just launched the iPhone 4S.  Surely Apple's inability to keep up with the pace of 4G data speeds on phones will catch up with them.

Carriers pay Apple handsomely for the right to sell the iPhone because the payback for the customer's data subscription is only in a few months.  Consumers are paying $50 to $100 for monthly data plan subscriptions and are NOT doing the same with iPads.  WiFi only iPad users are growing much quicker than the 3G iPad.  This translates into lower margins for Apple with a one time only sale price of $500 that will likely be lowered soon.  The current iPad selling at $500 will likely be forced to drop in price due to competition.

Amazon announced the Kindle Fire Android tablet at $200 and plan to make most of their money on data / content subscriptions.  Other Android tablet manufacturer including Google have grander visions of making money off of location based advertising which Apple is behind on as well.

This is the first earnings call since the passing of Steve Jobs where Tim Cook was alone at the helm.  Is he setting himself up for a great Holiday quarter? Apple could be sandbagging their next quarter before they release the iPhone 5 or have they run out of momentum?