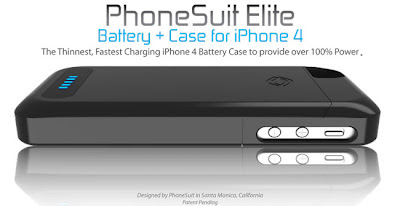 During the development phase of a new iPhone by Apple, a large amount of time is spent on the device's inherent signal strength, the calibration of its signal output and its compatibility with wireless networks. As such, if we assume that every iPhone's signal strength is optimized and that occasional spotty service can be ignored, there is still another unexpected cause for bad cell reception: the phone’s protective case.

For most consumers, the effect of their iPhone 4S case on their reception is still widely unknown. Usually, the purchase of such a case is motivated by the additional protection or personalization it offers. The realization of the case’s negative effects on reception only dawn on users after they experience an increase in dropped calls or an unusually slow connection. Nonetheless, not all cases are created equal and it comes down to choosing the right one.

The iPhone 4S' cellular dual antennas are located on the bottom side of the device. Long term iPhone users may thus have noticed that cupping a hand around the bottom of the phone during calls can cause signal loss and developed their own version of the humorously called "iPhone Death Grip." The iPhone 4 & 4S are especially sensitive to contact around the metal band encircling the phone and the seam on the lower left side of the band as they serve the purpose of covering a series of otherwise exposed antennas.

A drop in signal quality can thus also be caused by a cell phone case that wasn't properly designed to ensure the iPhone's best signal. Indeed, the manufacturers' efforts to create a device with great signal strength sometimes get completely annihilated by a case or cover with lower standards. Generally, it is advised to be careful with accessory manufacturers that are not endorsed by the manufacturer—Apple, in this case.

Among the most common materials used for the different cases —rubber or silicone, aluminum, and carbon fiber— some are often incriminated in the loss of cellular signal and the cause for Radio Frequency Interference (RFI). Carbon fiber cases show average levels of signal inhibition ranging from 40 percent to 60 percent of the original signal strength. Aluminum and other metallic cases obtained similarly high results, making both materials some of the most common reasons for blocked radio frequencies and lower cell signal reception. Ironically, aluminum and carbon fiber cases are on the most-wanted list of materials for iPhone cases because of their trendy and sleek design. Too often, this proves to be the wrong decision when it comes to signal reception.

On the other hand, rubber and other plastic derivatives are a safer solution for cell phone cases. The conductivity of any rubber is usually minimal and thus won't affect the cell phone's signal reception. In most cases, it can even have a positive impact by preventing your skin (more conductible than plastic) to get in contact with the metal rim of the iPhone 4. The most high-quality iPhone 4S rubber cases even use high-end material for a softer touch, a more fashionable look and a virtually undetectable effect on cellular reception.

If you are extremely concerned about your cellular reception, you might also want to look at the thickness of the rubber or even the color of the item. Carbon and titanium dioxide are common colorants for respectively black and white cases and might thus affect your reception as well.

On a final note, the general recommendation is that you should only buy carbon fiber or metallic cases if you can afford to consistently lose 1-2 bars of signal. Otherwise, a rubber case might be the safer solution.
By Syndicated Maps at 5/18/2013