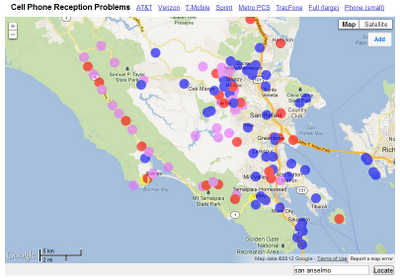 I was shocked recently on our family vacation how poor the cell phone reception was in Marin County.  I would be surprised if cell phone companies Verizon, Sprint & T-Mobile had any satisfied customers in the area.  The terrain is quite hilly and the trees are enormous.  It is one of the most beautiful areas in the County but probably has the worst cell phone reception of anywhere I have ever visited or vacationed with a reasonable population density.  This area is also the home to thousands of commuting technology professionals who work in San Francisco and rely on coverage during their daily commutes.

West Marin County especially almost had no reception at all.  This was surprising to me because of the population density and the amount of tourism and residents.  I would guess it is also a safety nightmare for emergency services in the area.  There are long stretches of road that have no signal and the roads are dangerous.  There are bicyclist all over the narrow roads that don't have any shoulder to ride on.  The roads are steep, have lots of blind curves and make for hazardous driving conditions if you are not alert behind the wheel.  I would imagine there are lot of car accidents.

Here is a list of cities, highways and locations in the area that had NO RECEPTION for T-Mobile and Verizon.  AT&T had a weak signal in many of these locations.

I was not able to review Sprint's coverage in the area but it is likely not much better.  Thankfully I am a  T-Mobile customer and was able to make and receive phone calls through WiFi at our friends house.  T-Mobile WiFi phone calls save the day once again.

I would imagine there is lot of resistance from the residents for installing cell phone towers in the area.  I would characterize the population of residents to be quite "earthy".  I have found these communities and the City Council's o be quite resistant to the installation of cell phone towers or new antennas.
By Syndicated Maps at 8/16/2012