Why Your Home Cell Phone Signal Has Stopped Working 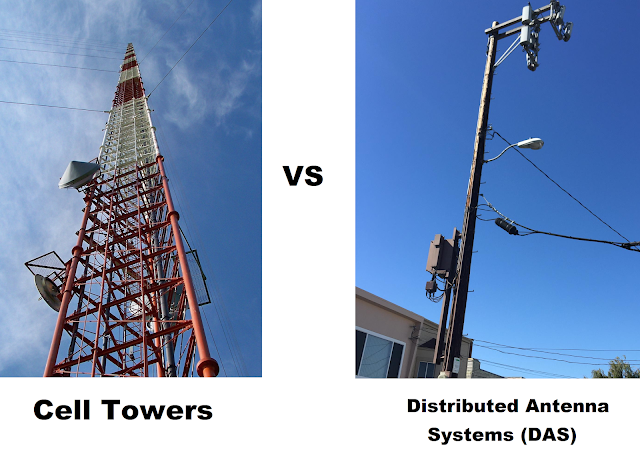 If you live in a rural area of the United States it is likely that your cell phone signal strength has have been fluctuating or might have dropped entirely in recent years as carriers move from 3G to 4G LTE.  Wireless carriers are increasingly moving services in areas from the very tall cell phone towers to the smaller distributed antenna systems like you see in the picture above.  Why?

These very tall cell phone towers can provide 2G, 3G and 4G LTE coverage of 1 to 2 miles and service several thousand people and homes from a single tower.  Carriers are increasingly dealing with capacity issues on these tall towers and have to turn wireless signals down or off in areas on antennas where there are congestion problems (too many users) or not enough customers (not profitable).

This could result in your home that previously had several bars of cell phone signal suddenly not having any signal at all.  The wireless carrier may put up a DAS system in your neighborhood to fix the problem if you complain enough.  DAS or Distributed Antenna Systems are essentially smaller and lower power cell towers that are installed on top or inside of buildings or utility poles most commonly.  DAS antenna systems will provide service to a smaller number of people.  The theory is that your signal will be more reliable and faster.

Unfortunately, the FCC or FTC has no mandate to the wireless carrier they have to inform you of changes in signal strength to your neighborhood.  Carriers might not even reflect this coverage accurately on their coverage maps for several years.  Deadcellzones.com has been operating for the last 18 years collecting complaints on a map of where customers have trouble getting cell phone signals.

The complaint latest trend in the industry seems to be carriers optimizing their networks in markets and dropping coverage for "unprofitable" markets.  There is no guarantee that coverage will be provided at your home and this is the biggest portion of customer traffic adding data to the dead zones map.

I am curious what some homeowners have done to remedy this problem with carriers.  Please comment below if you have any feedback or suggestions on how to solve this problem with each carrier.  These carriers have gotten so big that bureaucracy is probably the biggest obstacle to getting solutions for customers who have lost good home cell phone signals.