Are 5G Phones Worth It? 5G vs Fiber to the Home 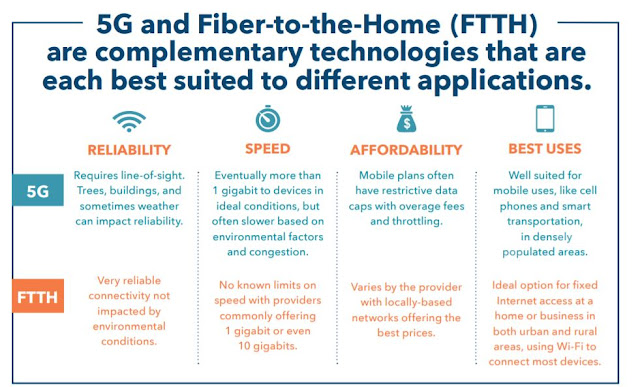 5G vs Fiber to the Home

Are 5G Phones Worth It?  Our overall assessment is that 5G isn't worth it at this time and you should focus on getting fiber to your home to achieve 500Mbs to 1Gbps speeds.  You home is where you need these speeds the most and you really don't need these speeds in your car or on the road.  Here are some additional reasons why 5G is a waste at this time and instead invest in fiber to your home.

5G phones are fast, but it's not yet worth the money to get it currently. The networks are small and very inconsistent and you have to choose a phone specifically to get 5G. They're way too expensive, and aren't the best phones available on the market today.

Looking at consumer-ready 5G coverage maps in the U.S. in 2020 it is a frustrating balance of hype and the typical network overstatement of what the networks really are like. Verizon and Sprint were the first wireless carriers to roll out a 5G consumer-ready mobile network, and while the speeds are impressive the coverage maps are not.

Verizon doesn't show 5G specific coverage areas on its regular network coverage map, and instead offers a list of neighborhoods within specific cities that should have 5G coverage in theory.

To Sprint's credit, it has started showing its 5G coverage alongside its 4G and 3G coverage on the their regular Sprint network coverage maps. You have to look for it specifically in the markets Sprint lists to have 5G already, and zoom in to an appropriate map level where you can see its distinction from 4G.

Tests have shown download speeds well over 500Mbs to 1Gbps when there is a clear view of the cell tower. During peak usage locations speeds inevitably drop with more devices on the tower.  The strange thing about using 5G phones is it requires the phones to be in a specific location to receive the faster speeds.  Often a few feet can be a huge difference in download speeds.  Objects can often blog a signal from a cell phone tower to a phone.

It's easy to see the potential of 5G speeds networks when you experience fast downloads.  Expectations have to be tempered by the reality that the networks just aren't large yet. So even if you're lucky enough to live in one of the very specific areas with 5G coverage, and already use that carrier, you may still be disappointed by how often you can actually get and hold a signal.

I am also very curious why someone needs such high speed downloads to their phones while traveling?   Maybe if you are streaming super high quality video or gaming.  However, these speeds are already attainable on most WiFi networks at home or at the office.  It remains to be seen what mobile applications will require 1Gbps speeds.  Please comment below if you know of any consumer related applications that will require such fast speeds.

Overall I don't think 5G is worth the price yet and think its best to wait.  4G LTE is already pretty good when you can get coverage.  I think the carriers would be better service filling in the network coverage gaps on freeways and in rural areas where they don't have coverage.  5G marketing hype is worth a read as well.  There has also been lots of speculation that some of the small cells and 5G cell phone towers might be emitting too much radiation for nearby residences.  Read this article on living near a 5G cell tower.
By Syndicated Maps at 3/02/2020