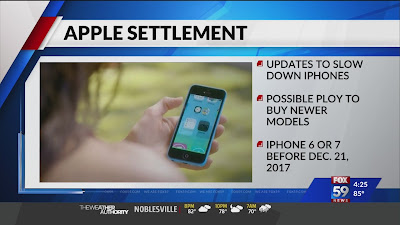 If you had an iPhone 6 or iPhone 7 that you noticed was slowing down significantly back in 2017, you can collect about $25 from Apple. The company agreed to pay $500 million dollars to settle a 2017 lawsuit that claimed it was intentionally slowing speeds on the devices to get customers to buy new, more expensive phones. You can submit a claim on the official settlement website. If you owned more than one device, you have to submit a separate claim form for each device.

What is the Lawsuit About?

In a consolidated class action lawsuit pending against Apple, Plaintiffs claimed that a performance management feature introduced for iPhone 6, 6 Plus, 6s, 6s Plus, and SE devices in iOS 10.2.1, and introduced for iPhone 7 and 7 Plus devices in iOS 11.2, diminished the performance of some of those devices. Apple denies all allegations and is entering into this settlement to avoid burdensome and costly litigation. The settlement is not an admission of wrongdoing by Apple.

What Does The Cash Payment Provide?

The cash payment per eligible device depends on the actual number of approved claims and other factors, including the award of attorneys’ fees and 5 expenses and Named Plaintiff service awards. Under the proposed settlement, Apple shall pay a minimum of $310,000,000 (the “Floor”) and a maximum of $500,000,000 (the “Ceiling”). Under no circumstances shall any of the Floor revert to Apple.

How to get the cash settlement?

To qualify for a settlement benefit, you must submit a valid Claim Form. The online Claim Form, including instructions on how to make a Claim, can be accessed at www.SmartphonePerformanceSettlement.com. If you wish to receive this cash payment electronically by ACH, please be sure to have your routing and bank account number available when completing the online Claim Form. You can also download a Claim Form to mail in by clicking here, or you may request a Claim Form by emailing the Claims Administrator at: Questions@SmartphonePerformanceSettlement.com or by calling toll-free 1-833-649-0927.
By Syndicated Maps at 8/11/2020