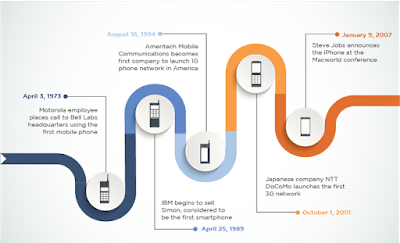 A Brief History Of The Modern Smartphone

Today, smartphones are like an extension of our body. They are not just used to make calls and send messages but to update the world on social media, keep track of our movements and appointments, provide our brains with extra memory, store our most important documents and keep us up to date on world knowledge and news.

While we might not remember a world without smartphones, they are in fact quite a recent invention. Let’s take a closer look at a brief history of these now commonplace devices:

A patent for a wireless telephone was first issued in Kentucky in 1908. However, this patent was more like a two-way radio than the smartphones we know and use today.

The very first actual phone call made from a mobile phone was done so by Martin Cooper, an engineer at Motorola on the 3rd of April 1973. Cooper made a call to rival engineer Joel Engel of AT&T from the streets of New York. The phone call, which was made using a prototype of Motorla’s DynaTAC model, was immediately followed by a press conference to confirm the achievement. The phone was only released to the market ten years later, becoming the first handheld mobile phone available.

While you might think today’s phones are expensive, the first mobile phones went on sale to the public for $4,000 each.

While mobile phones have changed dramatically to that first phone call in the 70s, the first smartphone wasn’t introduced until 1997. The Ericsson GS88 Penelope model has been created as being the world’s first smartphone.

The average person will check their mobile phone 150 times a day, or every 6 minutes. In a year we spend around 800 hours on our mobile phone, so if you check this site it only takes a minute. This obsession with mobile phone usage has led to an addiction identified as nomophobia.

Someone with nomophobia is afraid to leave home without their mobile phone and will check their phone much more than 150 daily average. Around 200,000 million people are suspected to be suffering from this disorder. Another disorder, known as ringxiety is attributed to someone that consistently hears a phone ringing even when it is not, while phubbing refers to a person who cannot focus on anything around them when busy with their mobile phone.

Over the years smartphone have diminished the need for other gadgets. Alarm clocks, and even watches, have slowly disappeared from daily life with around 60% of previous users no longer needing these devices. Even relatively new devices, like the iPod, had a short shelf life with smartphones quickly offering the same functionality to users.