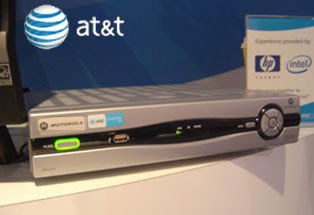 AT&T's Microcell U-Verse Set-Top Box
AT&T is reportedly working on a U-Verse IPTV set-top box that will include a Femtocell, claims an anonymous employee. This unit will cover TV, telephone, internet and improve your cellular reception with its Microcell technology included to route cell phone calls through broadband. Owners of iPhones, Blackberry's and 3G phones will be excited to hear any news but will it be enough to get you to switch from Fios, Time Warner, Comcast, Cox or Cable Vision?  The all-in-one box is said to launch in 2010, while U-Verse continues to expand throughout the U.S. However, in addition to this news comes the 3G Microcell, AT&T's stand-alone Femtocell, which is out in limited locations throughout the US.  Features include:

It has also been speculated by insiders and lightly reported in the media that AT&T will Spend $1 billion dollars on Free Femtocells for its customers or approximately 10M customers.  This accounts for only 12% of its 80 million customers who could likely see a free Microcell if they complain loud enough and are high ARPU customers.
By Syndicated Maps at 4/04/2010