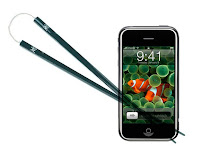 Should AT&T should follow the lead of SoftBank in Japan, who announced this month they would provide free femtocells and dedicated ADSL broadband lines to anyone with poor coverage?  AT&T claims to have 98% population coverage - 1% behind their competitors - so this allows them to resolve dead spots quickly where their customers have problems. Although also rolling out more outdoor cell towers, femtocells can be deployed much more quickly when hosted in their customer's premises.

AT&T announced it is rolling out 3G Microcells nationwide but many readers have been turned away indefinitely. Maybe the rollout isn't going to go as fast as promised. With AT&T continuing to draw heat about their network coverage which like many other networks have been straining under the demands of iPhone and heavy data usage, they'll want to ensure the solution works with few teething troubles before ramping up the volumes too quickly.