How to Drop Early Termination Fees 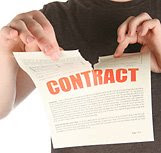 Dropped Calls = Dropped Early Termination Fees
AT&T plans to raise the fee it charges customers trying to get out of their wireless phone contracts early. This bold move comes after expectations that the carrier will lose exclusivity on the iPhone over the next year.  The early termination fees to $325 from $175 on contracts signed for smartphones, as well as cellular-connected netbooks. But for contracts on feature or messaging phones, AT&T will drop the fee by $25 to $150. The changes, which don't apply to current customers, take effect for new and renewing customers.

I have always recommended to our readers that they need to constantly document poor coverage and they should do this on our maps at Deadcellzones.com/att.html.  The best way to do this is log your dropped calls, data congestion areas and dead zones by adding pins to our map.  Once you have enough pins in the map you should print out a copy the map with complaints and use this evidence that your service was not adequately provided. You should also look on AT&T and Verizon's coverage maps and see where their maps are incorrect.  This is the easiest way to get out of a contract because there are service levels that must be maintained in order for the carrier to charge you each month for service.

Here is an old graph below which needs to be updated with the changes to reflect AT&T and Verizon hiking their fees. 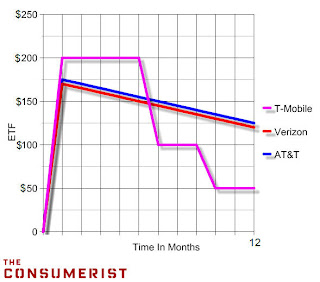 Related Stories:
How to Get Out of a Cellular Service Contract
By Syndicated Maps at 5/23/2010