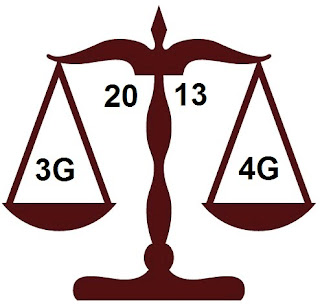 According to industry experts 4G wireless network coverage will reach parity with its 3G networks in 2013.  Parity is referring to when the size of a wireless footprint to match 3Gs current footprint which is about 98% of the population. Some say that 4G could reach 100 million people this year but that seems optimistic.  This is expected to increase to 200 million by the end of 2012.

Our speculation is that the industry will try and confuse the consumer as much as possible in order to try and differentiate their services.  Sprint uses the term WIMAX, Verizon is going with LTE and who knows what AT&T is going to market.  What all consumers need to know is that Wi-Fi is most definitely a competitor and its free.  Be a smart consumer and recognize that you may not need data access at high speeds on all parts of the globe so having a huge footprint is not that necessary.  3G was a big step-up from 2G and consumers really noticed the difference.  However, will they be able to differentiate 4G from Wifi?  I say No!

My speculation is that speed and coverage standards will need to be set in the next few years because the marketing coverage wars are only going to get more intense.  Clearwire is still a small company in terms of market share yet they already have a large Wimax (4G) footprint.  I am surprised that they haven't partnered with more carriers like T-Mobile, AT&T and Verizon who plan on building out their own networks or sticking with Wifi in certain areas.  Cable companies like Comcast and Sprint seem the most aggressive about leveraging the huge investment Clearwire has already made.