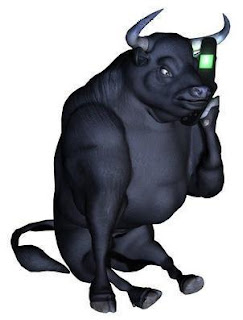 I have been hearing lots retail and institutional players scooping up AT&T & Verizon shares recently chasing nice 7%+ yields.  One way for people to do this is through the IYZ ETF which contains a basket of telecom stocks which include mostly: Sprint, Verizon & AT&T which make up 28% of the IYZ portfolio's holdings.  The IYZ ETF has a yield of 3.7% according to Google and Yahoo Finance based on the last dividend payout.


This video above was originally broadcast from the floor of the CBOE by the ETF Super Pit Hit on the OptionMonster YouTube channel on Wednesday, June 9, 2010. The video highlights potential bullishness or a possible hedge on the  trading desks of the largest bank Goldman Sachs.  Apparently a customer of Goldman was looking to buy the Telecom Exchange Traded Fund (ETF) IYZ iShares. Goldman Sachs wanted a July 30th (Exp) 20 call option (Bullish) which is not too far out of the money and relatively cheap considering all of the market volatility we have had as of late.  Some sophisticated investors might also argue this as a bearish indicator or a hedge against a short position in the ETF or long position in an individual stock.  However, strangely Goldman wanted a funky expiration date of July 30th and not the normal month-end expiration July 16 or August 20 (see options expiration calendar).  I am scratching my head as to why they would not take the middle of the month of July or August.  Is there some additional telecom news coming to market in the next 45 days?  Lets watch and see.  Maybe a potential merger or acquisition of T-Mobile or Sprint?

If ETF does make it above 20 it should have room to fly based on technical chargs but what could be the catalyst for this to happen?  Are they predicting that all of the 4G / LTE buzz and the iPhone 4 phone (Not 4G only 3G) will be the driver for this?  I happen to think telecom is going to face some fierce competition from FREE Wi-Fi as the primary competitor to LTE and 4G. I am not particularly bullish but I have owned the ETF for a few years.  The industry and the ETF have not performed particularly well over the last 10 years but I am hoping for the best.

One thing that surprises me is that only 25% of the fund is invested in Mobile Telecom companies and the other 75% is in Fixed Line Telecommunications companies.  Yes . . .  fixed line telecom is a bit more stable but that is not where the growth is.  I am also surprised not to see a small portion of the fund invested in Clearwire as well (CLWR) even though it has its' share of financial issues.  The last thing that surprises me is that cable companies Comcast, Cablevision and Time Warner absent from the index. (CMCSA, CVC, TWC).  Cable Companies are making a huge push into telecom right now and will be direct competitors with AT&T and Verizon Wireless soon.