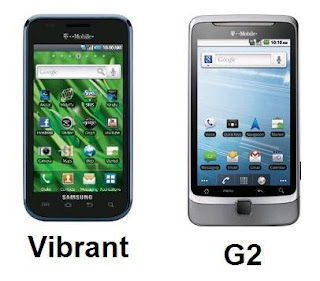 Are you a keyboard person or can't live without it or can you train yourself to use the new Swype digital keyboard?  Do you want the faster HSPA+ download speeds or do you primarily use your phone on Wi-Fi and can live with 3G?  Do you need the fastest processor?   Do you use your phone to read, look at photos and take video?  We try and answer these questions below . . .

I have been a long time T-Mobile G1 Android Phone user for the last two years.  I have been waiting patiently for the release of the new Android G2 which has a faster processor and refined hardware features.  However, when I walked into the T-Mobile store the other day to get a repair for my G1 something hit me.  The Samsung Vibrant Android Phone screen was beautiful and look strikingly similar to the iPhone.  However, when I picked it up it seems to be about half of the weight of an iPhone 4 which seems heavy.

The Samsung Vibrant comes a 1GHz processor that runs very fast. The G2 will be running on an 800 MHz processor. In day-to-day activities such as web browsing or checking email, the difference in power between the two devices won’t be significantly noticeable but may make a difference for power users.

The T-Mobile G2 offers connectivity to T-Mobile’s next-generation HSPA+ network, allowing the device to reach faster download speeds approaching or exceeding 4G speeds (3 – 6 Mbps average). The Samsung Vibrant is limited to standard 3G connectivity. You need to ask yourself if you are mostly going to be connecting via Wi-Fi or 3G. 4G or 3G HSPA+ is just not available in that many areas currently.

The G2 has a slide-out keyboard and the Vibrant does not.  However, it features the Swype keyboard or the Android digital keyboard options.  The screen on the Vibrant is so large that the fat finger problem does not seem to be an issue.

After a few weeks of using the G2, we have noticed some issues with the G2 SD card mounting read-only.  So far there doesn't appear to be any solutions to fix the problem and we will keep you posted.  We have tried 2 different micro SD cards from SanDisk and the problem keeps occurring when trying to use the camera.  It appears to be an Android issue and we are being sent our 2nd phone.

One feature the Samsung Vibrant is lacking is the tight integration with Google Maps and comes preloaded with TeleNav.  One feature I liked on the G1 was the ability to click on the location of a calendar item and Google Maps would automatically open up.  I suspect that this feature will be fixed in future updates.

Samsung has a great networking feature Allshare if you have a Samsung TV or other DLNA devices. DLNA (Digital Living Network Alliance) technology enables the Vibrant to wirelessly act as a media server and sends video content from your phone to other devices, such as TVs, monitors, and laptops.

The Samsung Vibrant has a beautiful 4″ display which is one of the best displays I have ever seen. The G2 has a 3.7″ display which is similar to the Google Nexus One. Both displays will reduce their power consumption and reflection when in direct sunlight.

Avatar pre-installed on the Vibrant and it can be watched on any Samsung TV using their AllShare application sharing on a home network.

Both phones have a 5MP photo and HD video camera. However, the G2 will be equipped with an LED flash. The Samsung records video in 720p HD and has various camera settings which include night mode and panoramic capturing. The Vibrant also has an amazing panoramic mode which takes incredible pictures. The G2 will also come with 720p HD video recording as well.

Samsung is launching a Media Hub for renting or buying TV shows and Movies.  This feature currently does not work as says "coming soon" when you try and open it.

Samsung Vibrant also uses a proprietary charging device that looks a lot like a USB but it's not.  You can charge it with their own USB cord but it's a smaller dongle that fits into the fun.  Unfortunately, you cannot use your old USB or phone chargers.

Related Post:
T-Mobile 4G Phones: G2 & MyTouch Compared
Why All Android Phones Are Not The Same
By Syndicated Maps at 9/15/2010