Apple is Shutting Mapspread Down 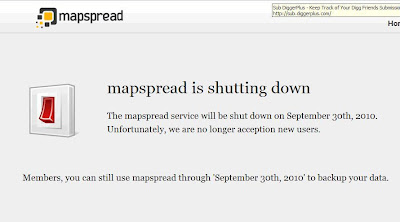 Its a bummer that Apple is shutting Mapspread.com is shutting down on Sept. 30 due to the acquisition of Poly9 earlier this summer.  This is the second hosted mapping company Deadcellzones.com has used that has been purchased by Apple in the last 3 years.  We were previously using Pushpin.com which was acquired by Apple in 2007.  I would to claim its a conspiracy to shut our consumer generated coverage maps down but I can't say that.  I can say that Apple is preparing for life after Google Maps and is quickly hiring engineering talent in order to build a mapping platform that can compete.

We have used hosted mapping services for Deadcellzones.com for the last six years and unfortunately we need to find a new home for our map database once again.  We are considering several services but as always open to user suggestions.