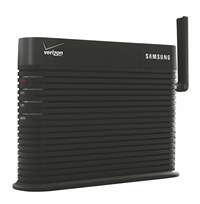 Click Femtocell to Search Availability by Zip Code
Verizon Wireless has updated its latest femtocell device with the launch of a 3G Network Extender replacing its previously offered Network Extender. The Samsung Electronics device will boost coverage in buildings and homes where a customer might have poor cellular coverage due to walls or challenging topography.  Similar to other carrier femotcell products, the 3G Network Extender relies on a customer’s broadband connection to backhaul voice and data traffic.  Six devices can access the femtocell, and that there would be no special rate plans or additional monthly fees for the device beyond the one-time charge of $250.

It also brings up the question why are they not simply using a Wifi network to rout data traffic?  Also, will this device work alongside a normal FIOS Wifi router?  Why not simply embed the femtocell technology into your FIOS router or FIOS DVR?


Even though Verizon claims they cover 98% of the population they still sell hundreds of thousands of these devices.  These poor cell reception locations are also known as dead zones even though the carrier touts they cover 98% of the population.  Verizon must assume that we all live outdoors and their cell phone signals can penetrate walls and trees.
By Syndicated Maps at 10/19/2010