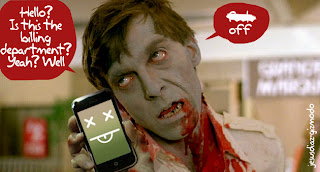 Smartphone Wifi security and now viruses on cellphones are something new to worry about.  It looks like China has now been hit by a particularly difficult "zombie" virus.  Shanghai Daily, says a so-called "zombie" virus disguised as an anti-virus app has infected more than one million cellphone users in China. It has left mobile phone users vulnerable to the malicious hackers. The "zombie" virus is hidden in a fake anti-virus app. Once the app is installed, the virus sends all of the names and phone numbers on a user's SIM card to the hackers, who then automatically take control of the phone, sending spam texts out to recipients.

The texts include lots of links that infect other phones with the same virus. The texts are also sent to pay-to-text phones that suck those users dry of messaging fees. The virus has spread to 1 million users, and continues to run rampant on mobile networks. The government is having a difficult time finding the hackers, but the Chinese National Computer Network Emergency Response Technical Team Center is working to get to the bottom of it.

Its not clear which mobile phones or mobile operating systems are experiencing the virus problems but would appreciate any feedback from users who have some insight into this.
By Syndicated Maps at 11/11/2010