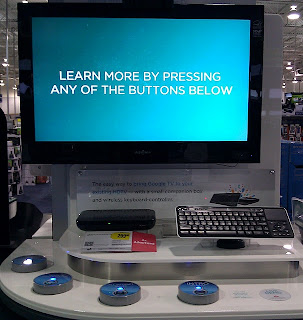 Google TV Logitech, Sony Blue-Ray are on display at Best Buy showing off the capabilities on Sony TVs. I really like the concept and the fact you can use your TV display to surf the internet and watch YouTube vides but its not compelling enough for me to buy.  Sony was the first manufacturer to jump onto the tidal wave of Google Internet TV and now indications are that Samsung will be the second.  I just purchased a Samsung 3D TV

and love the idea of having applications directly on the TV and having a display directly connected to the internet.  Its great to see technology finally trying to disrupt cable monopolies who control video content distribution. 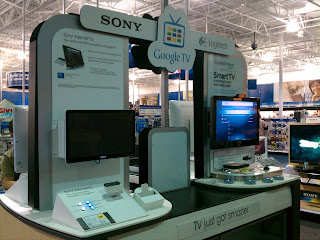 The capabilities on display at Best Buy demonstrates some nice functionality but nothing too complicated that couldn't be accomplished in a applications similar to Pandora or Hulu.  However, I really don't want to have another device like a Logitech keyword to do it.  I would prefer having the capability to control the Google TV app with my laptop or iPad that is directly connected through my wireless network to the TV.  That is the holy grail of being able to use a huge plasma, LCD or LED to surf the internet.  Lets hope that some is working on it because I don't see lots of consumers buying this product in its current form.