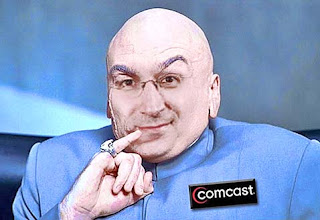 It's great to see networks like Fox starting to pull their programming from Google TV.  This only means one thing!  Networks who believe in programming and cable companies who believe in paid distribution feel threatened.   Google TV is a disruptive technology platform that seeks to destroy a monopolistic distribution model of content and companies like Comcast denies Google TV as a competitor. The cable distribution monopoly and give consumers what they want.  Programming is about to become a thing of the past as more and more consumers just consume what they want when they want.  Not only do they select their programming on-demand but they are not doing it on multiple devices like the iPhone, iPad and Android.  Cable operators have leverage because they are in the broadband access business and starting to get into the wireless broadband access business.  The only thing I think that will begin to protect their business in the short term is to emphasize 3D TV channels which provide a tremendously cool viewing experience (only at night).

For the longest time cable companies like Comcast, Cablevision, Cox, Time Warner have made most of their money charging networks carriage rights.  The FCC knows consumers are getting screwed and has not disrupted this shady business practice and networks have been getting away with it making money hand over fist.   Well, this is all about to change if you can now consumer your programming directly over the internet.  You don't need a cable line any longer when you can download the programming over your neighbors shared WiFi network or your wireless carrier 4G, LTE or Wimax network.   The chart below shows you how the cable companies are losing leverage for the distribution of their content.  They used to own almost 50% of the channels and now they own only 15% as the number of channels have increased and the content has become more specialized.  Great examples of this include the NBA, NFL and MLB who have started their own networks and don't rely on CBS, ABC, NBC and Fox for all of their content distribution. 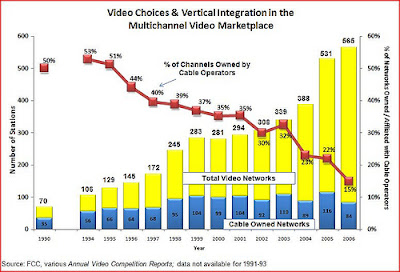