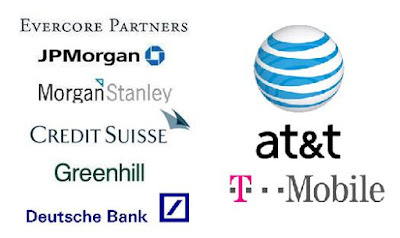 Its very important to note which investment banks are helping to AT&T bamboozle Washington politicians into approving this deal.  What goes around comes around and these companies will certainly get a bad case of bad charma blues if this deal closes and they take money to bank the deal.  Here is a list of bankers involved in the deal.

Staying out of this mess might be a blessing in disguise for investment bank Goldman Sachs who apparently is not involved in the merger dealings.  Don't be surprised if the smartest investment bank in the World Goldman Sachs (GS) is on the short side of the JP Morgan bridge loan.  Goldman and hegdge funds will make all of the money on the short side as the AT&T house of cards comes tumbling down.

AT&T hired Evercore (EVR) due to a relationship with founder Roger Altman who hasstrong ties to Washington. Altman, a former deputy secretary of the U.S. Treasury, has expanded Evercore, which he founded in New York in 1996, into a more-than-600-employee firm. "Altman called Randall Stephenson (AT&T CEO) and said, I could help you get this through the government," said a source close to AT&T.  Before founding Evercore in 1996, Altman serving as deputy secretary of the Treasury under President Clinton from 1993 to 1994. He also chaired Resolution Trust Corp., a Treasury agency that reimbursed savings and loan victims. Evercore's relationship with AT&T started in 2006 when it advised the company on its $102 billion acquisition of BellSouth. Altman resigned under pressure after allegedly leaking information to the White House about the Whitewater investigation. A source close to Altman said, "He's very close to President Obama." Obama also considered hiring Altman as head of his National Economic Council. Other Evercore bankers include Dan Mendelow & Eduardo Mestre Read in NY Post:


JPMorgan Chase (JPM) is helping to finance the bridge loan and is headed by Jamie Dimon.  JP Morgan Bankers include:  Karl-Georg Altenburg, Tammo Buennemeyer, Tom Cassin, Jake Donavan, Andy O’Brien, Kurt Simon, Joachim Sonne, Jim Woolery, Anwar Zakkour
Greenhill & Co (GHL) is AT&T's other advisor in the deal which is a small public investment bank based in Los Angeles.  Greenhill has significant ties to Germany based on their portfolio of deals that have closed.  Bankers include Robert Greenhill, Gil Ha & Lawrence Chu.