Will The iPhone 5 Have Battery Drain Problems? 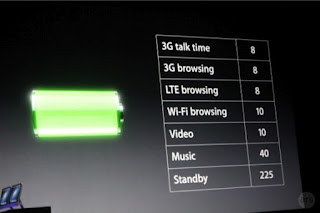 Early entrants of LTE Motorola and Samsung phones have impressed users of smartphones, but one big issue has held back its growth: horrible battery life. This is the biggest question overhanging the rapid adoption that Wall Street analysts are forecasting.  If the iPhone 5 proves to drain battery power too quickly as it searches for an LTE signal it can't find this could be the black swan to hurt adoption.  The faster the download speeds historically on the phones the more power a phone will use.  The further away your iPhone gets from a cell phone tower the more power it requires to search for and/or use a weak signal.

Apple explained some information about how the iPhone 5 battery will handle normal day-to-day functions performed by its users. While the iPhone 4S featured 200 hours of standby, the iPhone 5 will feature an improved 225 hours of standby time. Wifi is the same as the 4S with 10 hours.  LTE browsing is said to be 8 hours which I have a very hard time believing.  The question becomes how much testing was done in a real world environment?

Related Articles:
Why Does My iPhone 4S Battery Drain Fast?
Why Does The iPhone Battery Replacement Cost $79?
Are LTE Phone Batteries Ready for Primetime?