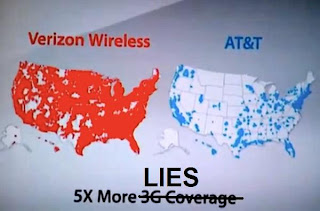 
In the fall of 2009 AT&T sued Verizon over its "There's a Map for That" ads and I think rightfully so.  Ultimately, AT&T lost the case in court but I think because they lacked the insight how to turn the argument back on Verizon to highlight their false advertising.  If I were AT&T I would have simply said "we all have coverage problems and here is exactly where Verizon is lying".  Exhibit A above. The print and television commercials, try to articulate how much theoretical 3G coverage Verizon has from a 50,000 foot level on a red versus blue colored maps of the US.  AT&T's complaint seemed to focus on the choice of the white or blank background in the two different 3G coverage maps, which implies "no coverage", but actually should mean something else in the AT&T map, as there still exist AT&T's 2.5G/EDGE coverage in theory.

At some point consumers will get fed up with Verizon's arrogant campaign and it will come back and bite them in the ass.  There are lots of up-and-coming wireless operators who are hungry like Google, Comcast, Cox, T-Mobile, Sprint that are looking to take advantage of the fact that Verizon can't get seamless coverage into 50% of homes in the US.  My prediction is that karma will get the better of them soon.  "Jump the Shark" is probably the best way to describe their fate.  We think honesty, integrity and transparency with quality coverage will win wireless customers over in the next decade.
By Syndicated Maps at 2/22/2010