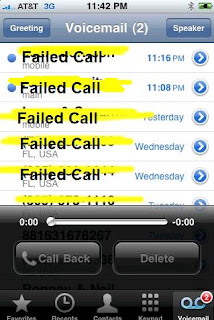 It is virtually impossible to complete a call these days without a minimum of at least one dropped call.  Why does this seem to happen at the beginning of the call several times and they seem to work fine?  Failed calls and dropped calls are far more annoying than dead zones themselves.  There is much evidence to point out that as data speeds increase exponentially and the number of users increases on the networks that most cell phone users will experience more coverage and reception problems. Industry studies suggest that as the density of mobile phone users increases for wireless access to cell phone towers the likelihood of dropped calls and data congestion gets much worse.

Most 3G mobile phone users can identify several locations where their smartphone consistently drops calls. Our solution is to provide more transparency about where capacity is needed for data offloading from the network via Wifi to relieve carrier networks. Click on the map links above to report dropped call locations.  Here are some steps to follow after you have submitted your complaint on our map:

The most common cause of dropped calls is not exactly what you may think.  Most people think your proximity to the cell phone tower or location is most important.  However, the amount of people on the same cell tower or network around you is actually the most important these days as competition for signals intensifies.  Obviously, your cell phone will have the strongest signal outdoors and when fewer people are using the phone around you.  Densely populated areas near offices and apartment buildings usually experience the most dropped calls.  Also, rush hour in your car is another common location for dropped calls.

Did you also know that 3G networks actually breath?  This means signal strengths are constantly being adjusted by the carrier according to the other users around you.  If your signal strength has always been good in an area, but suddenly goes bad, try removing the battery from your phone.   Leave the battery out for at least 10 seconds. Replace it and check your signal strength again.
All of this evidence might encourage you to ask yourself if it still makes sense to stick with your larger mobile operators AT&T and Verizon?  Or might you be better off going with a smaller regional carrier carrier who has less customers around you competing for access to the network?

Related Posts:
Why is AT&T's MicroCell Dropping Calls?
By Syndicated Maps at 8/19/2010