Where is MetroPCS Expanding Coverage? 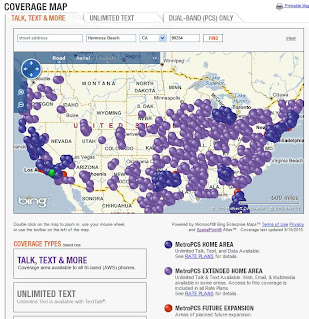 Admission of guilt is a hard thing to do when you are a large carrier like AT&T or Verizon trying to protect your turf but MetroPCS is now the 5th largest carrier with 7.3 million customers and is doing something right for the industry.  I have to praise MetroPCS's marketing and management team for taking a leadership role in the telecom industry and actually admitting where they don't have coverage and where they plan to expand their wireless footprint. Click on the map above which will take you directly to their coverage map. If you click on the red bubbles or you find areas like Palm Springs shaded in red. This implies they don't currently have coverage in the area and are expanding.
MetroPCS has also been very aggressive about using DAS in local markets which have allowed them to speed up the delivery time to coverage in markets. Distributed antenna systems are gaining traction as an alternative way for smaller carriers to fill in coverage or add more capacity to the wireless network when new cell sites are not an option due to city zoning regulations.  These smaller antennas usually sit on top of utility poles' faces and are starting to face their own challenges in an unsettled regulatory environment.  Read more about Distributed Antenna Systems  NextG and ExteNet which may be providing much of the infrastructure for MetroPCS to expand.


MetroPCS does a great thing by issuing a press release about the coverage expansion but then also publishes this area on their map shaded in red.  It is a great example of how AT&T, Verizon, T-Mobile, and Sprint should issue their press releases and then plot the area on a map with red dots similar to MetroPCS.  Unlimited Wireless Carrier MetroPCS Expands Florida Coverage to Gainesville and Ocala. Spacial Point is the company helping MetroPCS provide the maps which is a Microsoft and Bing Maps partner.
You can also add Metro PCS coverage problems on Deadcellzones.com at our map here. 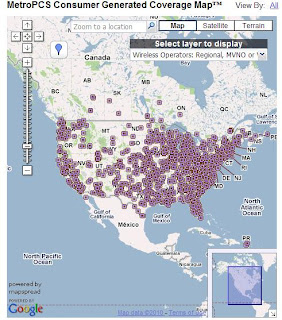