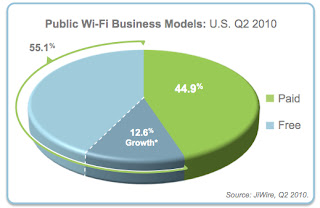 Fon.com Ended 2010 with 3.35 million Wi-Fi hotspots, €28 million in revenues
Fon, the Wi-Fi network company backed by Google and Skype, says you can find 3.35 million Fon hotspots all across the globe these days. That's impressive growth, which comes down to more than 200% year-over-year. Last time Fon shared numbers, the company revealed that it tracked 2.5 million hotspots (this was in October 2010). Clearly, growth is accelerating for the company, in large part thanks to distribution partnerships it has struck with telecommunication companies all over the world. Fon also reveals that they’ve ended 2010 with revenues of €28 million, up from €5 million the year before, growth it attributes to the surge in use of Wi-Fi devices worldwide. (TechCrunch, 2/1/2011)

Half of mobile web browsers choose Wi-Fi
Bango reports that at the start of 2011 Wi-Fi accounts for over 50% of mobile user connections to the Internet. These latest Wi-Fi stats announced by Bango follow a report they published in February 2010, which highlighted that at the time 23% of mobile website visits connected thru Wi-Fi. The increased adoption of smartphone devices and the popularity of tablets are among the factors behind the surge in Wi-Fi usage. (Light Reading Mobile, 2/2/2011)

T-Mobile USA offloads 5M Wi-Fi callers
T-Mobile USA said 5 million of its 34 million subscribers route some of their cellular calls over a Wi-Fi network, and that around 1.25 million of those subscribers use the carrier's new Wi-Fi Calling Android application. Further, the carrier said its subscribers place around 40 million calls per month over Wi-Fi--a significant figure considering the world's wireless carriers continue to seek ways to reduce traffic on their wide-area cellular networks. (FierceWireless, 2/16/2011)
By Syndicated Maps at 3/14/2011