Google Voice and Skype are good for the consumer 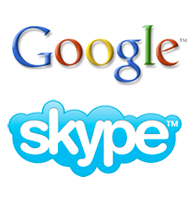 Millions of U.S. cell phone users could have seamless home coverage if they could simply use Wi-Fi VoIP services from Skype or Google Voice. More than 50% of cell phone users who have wifi in their home also are unable to get a strong cell phone signal throughout their entire home. Please explain why in 2009 I still can't use a VOIP service on my iPhone or Android?

Google has published a blog post responding to AT&T's complaints. The gist: A) Google Voice is a free application and therefore not required to follow common-carrier rules or basically listen to the FCC at all; B) it's not a replacement for traditional phone service such as that offered by AT&T; and C) it's still in private beta.

Wireless carriers fundamentally do not like Google, Yahoo, Facebook, Myspace or even the tiniest blogger either. They see all these Internet companies coming to the playground and taking their marbles away. Carriers would like to charge you for every single thing that traverses the Internet, each individual email, every IM, every Facebook post, every Twitter post, literally everything. This is precisely why we need net neutrality and why it is important for the FCC to keep the lines drawn between the telephone common carriers and the Internet.

in reference to: City Brights: Yobie Benjamin : Why AT&T is full of it and why Google Voice is good for the consumer
By Syndicated Maps at 9/27/2009