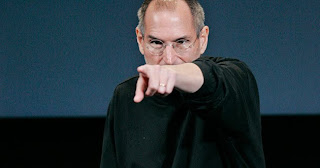 Steve Jobs Cronies Say Better Cell Towers Are the Answer to AT&T
Steve Jobs quoted at the D8 conference:  "We don't have people to climb up on poles and fix cell phone towers. I am told this by credible people who are honest and open about the problem.  To make things better they allocate spectrum, increase the back-haul and switches.  Gigabit Ethernet and better switching technology should help.   Things will be getting worse before they get any better.  I am told a lot places will get a lot better by the end of the summer.  I am told this by high-competency people."  Watch the Video Here

The problem is actually going to get worse Steve as more and more people are competing for cell phone tower access.  Cell phone towers can only handle 10% of the data traffic compared to voice traffic.  The only way to solve this today is to distribute the load onto smaller and smaller mini cell phone towers that are called femtocells.  AT&T thinks the problem can be improved for customers selling a 3G Microcell.  AT&T also thinks the iPhone has deficiencies in the batter life and phone switching capabilities.  This requires Apple customers to purchase another device if they want to improve cell phone reception in their phone or the office.  I am surprised that AT&T is not selling these devices in the Apple stores as they would be flying off the shelves.