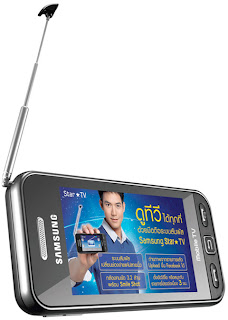 Mobile TV is Common Everywhere Except the United States and Europe
Isn't it embarrassing that free, on-the-go Mobile TV viewing is common just about everywhere except the United States and Europe?  US operator resistance and a maze of conflicting technical standards and program licensing hurdles have kept the technology out of the global mainstream. Why the lack of independence of content distribution and handset contracts has not caused a consumer revolt yet in the US still has me dumbfounded.   Because we are still being bamboozled by government bureaucrats and corporate executive thieves while the FCC turns their head the other way.

When South Korea the World Cup in Port Elizabeth, South Africa, life will not necessarily grind to a halt back in Seoul.   Many fans will instead follow a live broadcast of the match on their mobile phones. In South Korea, free-to-air mobile TV is a five-year-old fact of life. According to the country’s broadcasters, 27 million people — 56 percent of the population — watch regularly.

While South Koreans are the world leaders in mobile TV viewing, the technology is also catching on in China, southeast Asia, India, Africa and Latin America, where 80 million people now have cellphones that can receive free, live TV broadcasts.  At least 40 million people are watching live TV this year on mobile phones, and most live in emerging markets where operators, which prefer to sell TV programming for a fee through their wireless networks, do not control the sale of handsets.

In the complex world of wireless communication, free-to-air mobile TV technology is relatively simple. With a tiny receiver chip and telescoping antenna, a mobile phone can receive free digital or analog programming like any other television.

In South Korea, 25 million people watch free digital terrestrial broadcasts on mobile handsets and two million pay to subscribe to satellite programming, according to Korean broadcasters. The typical screen made by Samsung is a three-inch, or 7.6-centimeter, diagonal. Batteries support three to six hours of viewing. In Korea, free mobile TV broadcasts are interspersed with ads.

Where are you Google TV?

Telegent is shipping about 750,000 chips each month to handset makers, most designed for viewing analog broadcasts in markets like Brazil, Peru, Argentina, Russia, Nigeria, Thailand, Egypt and China. Brazil is one of Telegent’s biggest markets.

But with the level of data traffic surging on wireless networks around the world, some operators are beginning to look to free-to-air mobile TV — which operates independently and adds no additional traffic burden on an operator’s network — as a way to retain customers.

In April, 12 broadcasters and television content owners in the United States, including Fox, NBC, Gannett Broadcasting, Hearst and Cox Media, formed a joint venture to pool their broadcasting spectrum and eventually deliver mobile TV to 150 million people. The U.S. effort is in its initial stages, and no deadlines have been set for adoption.

Samsung, which includes mobile TV chips as standard technology in its high-end smartphones in South Korea, is making a handset for Sprint that works on the U.S. mobile broadcast standard, ATSC-M/H. Samsung also makes a DVB-H phone for Europe, two that work on Latin America’s ISDB-T standard and an analog handset for Southeast Asia.

On May 24, Sprint and nine broadcasters in the Washington-Baltimore area began a four-month trial that will broadcast programming to mobile phones, netbook computers and portable DVD players made by Samsung, LG Electronics and Dell.

Dave Lougee, the president of Gannett Broadcasting, said the organizers of the trial, a group of 900 U.S. television stations called the Open Mobile Video Coalition, were hopeful consumers would take to the technology.

The trial is being supported by every facet of the U.S. television industry, including content owners, broadcasters, broadcast equipment makers and advertisers, represented by the Television Bureau of Advertisers and The Ad Council.  Read more