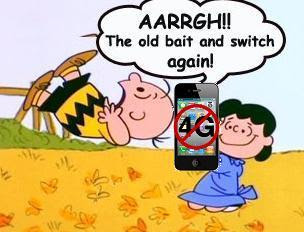 Apple's new handset is called the iPhone 4 and its not 4G as all the pre-announcement hype would have us believe. There are a lot of handset manufacturer marketing teams who are frustrated about the launch of the latest iPhone 4 (NOT 4G).  They think Apple is confusing the marketplace branding a phone the 4th generation and it not being 4G.  There are lots of social media and blog sites asking the same question as one would assume that it should be 4G with all of the hype.  It's NOT  I think it is also pretty "sleazy" of Apple to call it the iPhone 4 just as 4G and LTE is starting to get marketed heavily to consumers.
Sprint, T-Mobile & Verizon Have 4G Networks . . .  So Why is AT&T Behind?
Currently, Sprint is the only carrier that has a 4G network while Apple and AT&T currently have an exclusive deal that is expected to last until 2012.  AT&T is far behind the other carriers Sprint and Verizon in deploying a 4G network on HSPDA. When the FCC auctioned off the analog TV spectrum in 2008, Verizon received a block of spectrum that enabled them to create a nationwide 4G network in a single frequency range, which is easier to implement. AT&T, however, finished second in the spectrum auction and ended up with a patchwork of disparate frequency ranges, which creates a network and handset-design complications. As a result, Verizon's LTE network is due to launch first, sometime this year, and AT&T's not until sometime next year.
Related Stories:
Don't Buy AT&T's iPad 3G
What Does 1G 2G 2.5G 3G 3.5G 4G 5G Mean?
How to Prevent iPhone 4 Reception Problems
By Syndicated Maps at 6/09/2010