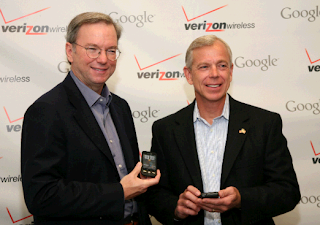 I am starting to see some interesting searches on our Deadzones.com for curious people looking for information about "Google buying Verizon FiOS".  I have no information to confirm whether this is true but would appreciate any anonymous tips in the comments section below.  After listening to Eric Schmidt's interview yesterday at the Web 2.0 conference it is now apparent that Google is afraid of Government regulation, especially in wireless.  For competitive and regulatory reasons they have not gone into the wireless market.

I decided to piece together some public information to see if it would make sense.  The more I write about it and do research it could be a "match made in heaven" for people who love high-speed access and reliable service.  Google buying Verizon FiOS makes a lot of sense and gives them a network to finally get into the wireless game.  They have by far the best high-speed broadband service into the home and its just another reason why consumers would want to cut your cable TV cord and start using Google TV.  Verizon FiOS is the 4th largest home broadband provider with 15M homes. Google has also been quietly building out its fiber network which is great for customers who have been struggling with dropped calls and coverage.

Google announced plans to build an experimental, ultra-high-speed broadband network and the response has been tremendous from potential users. Hundreds of communities and hundreds of thousands of individuals across the country have expressed their interest in the project. Google is not going to be able to build the network in every interested community but they certainly could do it quickly by buying Verizon FiOS. Their plan is to reach a total of at least 50,000 and potentially up to 500,000 people from this experiment that will help improve Internet access everywhere.

This rumor is further justified after Verizon stopping the expansion of its FiOS network early this year. The decision leaves many high-speed broadband seekers in 32 states without the option of signing up for the powerful FiOS network. Verizon has focused FiOS rollout efforts mostly near its primary customer base on the East Coast, although it has hit major markets in California and Washington state. FIOS has been largely focusing its efforts on completing existing fiber buildouts especially in the dense parts of Philadelphia; Washington, D.C.; and New York City. These are areas where Comcast, Time Warner Cable and Cablevision offer tough and well-funded competition.
By Syndicated Maps at 11/16/2010