How is the HTC Thunderbolt Battery Life on Verizon 4G LTE? 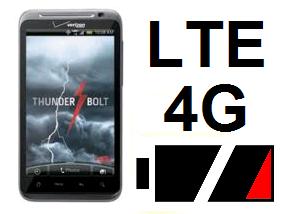 Does the HTC Thunderbolt suffer from poor batter life just like the Droid?  Are device manufacturers jumping the gun rolling out these new devices the will require frequent charging?  Some reports say the Thunderbolt consumed 92% of its battery life in 3.5 hours. Its been our experience that 4G LTE will be great for those who want to pay for the expensive 4G LTE data plans but do you really need 4G on your phone?  We would appreciate your feedback and comments below on the performance of the device.  Our experience has been that Verizon is they tend to over hype their phones which have underperformed on their CDMA network in the past.  The million dollar question is how with these 4G phones perform on the LTE network?  The other huge question is where is 4G LTE available?
By Syndicated Maps at 3/25/2011