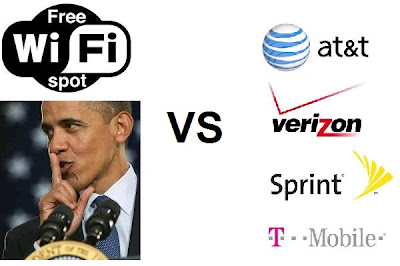 Hip hip hooray!  The U.S. government will work with the FCC to free up 500MHz of wireless spectrum for commercial and unlicensed uses over the next 10 years. Obama's wireless spectrum plan will greatly enhanced speeds and the economics of providing low cost access for most of the US population.  We believe that wireless access will be free and widely available just like drinking water out of a public fountain.  However, it will not happen overnight and the process is going to painful.  There are some major telecom companies who want to stand in the way of the FCC and Obama from preventing this to happen.  So, it will be a long and painful process that will eventually disrupt the large wireless monopolies who hoard spectrum and only care about their own profits.

This free wireless will help create jobs and enhance service for the struggling carriers who will have a hard time monetizing their customer base with their new 4G and LTE technologies.  Free WiFi hotspots are  growing 25X faster than cell phone towers and provides sufficient data access for frugal wireless users.  Carriers are expecting their existing customers to pay upwards of $1000 per year for high speed LTE and Wimax access. Other companies like Google would like to subsidize wireless with free advertising thus cannibalizing big carrier subscription based business models.

Mobile carriers are spending billions of dollars to build out 4G networks and most insiders thing that this service will compete with paid. A government driven solution will help bring broadband to rural areas and may become a low-cost alternative to fixed broadband. Despite the coverage maps that AT&T and Verizon hype there are thousands of rural customers who do not have any wireless access. These areas throughout the US and world have been known as "dead zones".