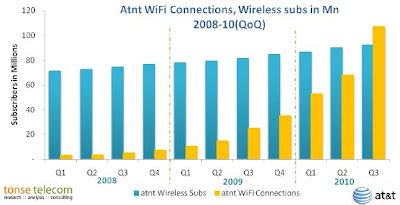 AT&T has more than 23,000 U.S. hotspots with locations in all 50 states, and over 125,000 hotspots globally through roaming agreements.  See the US AT&T hotspots locations map.   The chart above shows a very interesting trend that is great for all wireless data consumers representing how in AT&T’s WiFi network is growing 25X faster than its wireless subscribers. The most interesting thing is that the number of Wi-Fi connections is moving significantly higher which only means subscribers are linking up more and there are a whole lot of new subscribers too. Another interesting fact is that Free WiFi hotspots are growing 5X faster than cell phone towers and this figure is likely going to have to accelerate to keep up with the growing demand for WiFi data offload. This chart is pretty much in line with the growth of cloud computing which demands mobile data offloading.  How does 4G & LTE compete with Free WiFi?  How will this affect sales of AT&T iPad 3G when you might only need WiFi in the future?

This is a great trend for AT&T customers who are all competing for 3G coverage in San Francisco and coverage stinks on the network.  This is also great for frustrated customers who have received refunds for poor data coverage and dropped calls.  This should eventually alleviate much of the 3G network congestion that customers have experienced while driving in their car or in an area with a lot of iPhone users.
By Syndicated Maps at 11/15/2010