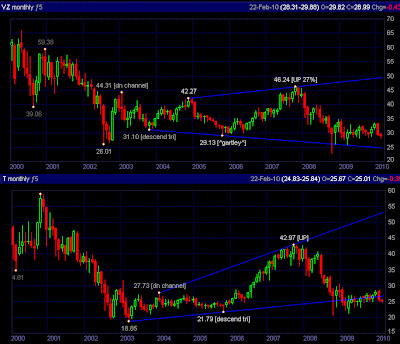 
Have you ever had a Carl Icahn moment while following a mismanaged company and say "I Can Do Better"?  Carl Icahn is infamous for hostile shareholder takeovers of companies he believes where management is not creating shareholder value and I think an opportunity is slowing emerging right before our eyes.  My "aha moment" came this fall when I first saw the Verizon ads touting how wonderful their cell 3G phone coverage map is compared to AT&T.  AT&T stupidly responded by suing them for false advertising and lost.  If I had a billion dollar checkbook some shareholder support we could do some serious industry damage and salvage what could be two dieing giant super powers.

It makes me nauseated to see billions of dollars wasted marketing "coverage maps lies" to consumers that no one actually believes.  Both companies are guilty of ridiculous advertising campaigns like "There's a Map for That" and the old school management style is losing credibility quickly with the demands of educated customers.  This is the same old school management that has insulated itself for years with huge layers of bureaucracy in order to keep their high paying jobs.  Have you ever asked yourself why the United States lags way behind the entire world when it comes to wireless innovation while their parent companies have lost a combined $250 billion dollars in shareholder value the last 10 years?

AT&T (T) and Verizon (VZ) both have huge dividend yields of 6.5% per year have lost -50% of their market cap value in the last 10 years.  It appears these cozy senior management teams are highly skilled experts at insulating themselves and keeping their high salary jobs.  Insiders own less than 5% of the stock and every list director makes a salary of more than $1M.  Just to make my point AT&T's Ralph de la Vega makes $1.5M per year stock options and Verizon's Lowell McAdam makes $1.7M + 10m of exercised stock options. Ivan Seidenberg made off with $17.5 million in 2009. Sounds pretty cozy to me when you can just pay off your Board of Directors and shareholders with huge dividends instead of investing adequately in your customers and infrastructure.  Ivan What happened to CEO's like John Chambers who makes $1 salary and is compensated entirely on creating shareholder value.  My perception as an early-stage investor for the last 10 years and as an industry outcast is that there is a lot of "cool-aid" becoming drunk by every employee in the telecom industry and its about to change.   How?  Its simple:  Google is developing disruptive technology and advertising business models that AT&T and Verizon can't compete with.

The United States is laughed at around the world for our lack of innovation and I blame this on the stagnation of innovation caused by the two largest bureaucratic giants AT&T (based in Atlanta) and Verizon (based in Dallas).  These two cities are not exactly technology hubs throughout the world and each company has 80,000+ employees each.  It makes me sick to see that the two largest companies who own 66% of the entire US market or 160M+ wireless customers have done virtually nothing to innovate.  Even with AT&T's brilliant move of getting an iPhone exclusive contract
and their stock is still flat and can't manage to go up.

Here is what I would do if I had the backing of a private equity group and the "balls" of Carl Icahn.  I would fire the CEO's of each company and the teams responsible for marketing.   I would then invest heavily in femtocell and location based advertising technology (mini cell phone towers for the home or office).   At $100 per unit cost I would give femtocells to half of my customers who had coverage problems and that is about half 40M.  It will cost your roughly $4B and the payback would likely be within one year if advertising was sold in conjunction with it.  At the same time I would buy an advertising company that had location-based adverting to help subsidize the cost of the devices.

I am a stock market technician and do not like what I see on these long term monthly charts as each stock nears the bottom again.  Perhaps their needs to be management shake up in both companies as companies like Google Voice, Clearwire, Comcast, MetroPCS, Tracfone and Skype start nipping at their heals with disruptive innovation.  I am calling it right here and now that if the stock falls below the 2002 / 2003 lows of $26 on VZ and $19 on T that there will be a shareholder revolt and soon after a management shakeup.  Out of full disclosure, I am not short or long the stock.
By Syndicated Maps at 2/23/2010