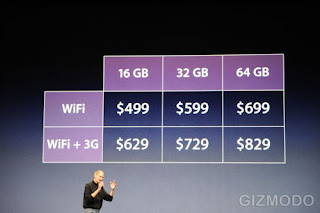 Have you thought about the total cost of ownership of an iPad before you have purchased it?  Have you thought about tethering your HSPA+ smartphone to not pay for another data plan?  Is it worth the $180-$360 per year to have access to your data while roaming around town or does it make sense to use an iPad without a data plan?  If you are like most of us you are simply using the device to browse emails, read news and use the various applications on the platform.  Since you can't want YouTube videos with Flash you might just stick with the 250 MB plan.  However, if you are a heavy data user and consume a lot of videos you will want the "unlimited 5GB" per month plan.  AT&T is trying to get their grandfathered customers off of the AT&T all you can eat data plans so beware.  Also, here are some tips on how to tether your iPad to a 3G phone which will save you money not paying for a data plan you don't need.  Also, if you travel internationally you will want to avoid using your data over the 3G network because of the ridiculously expensive AT&T international data plan rates.