10 Creative Ways Clearwire Could Start Thinking Outside the Box 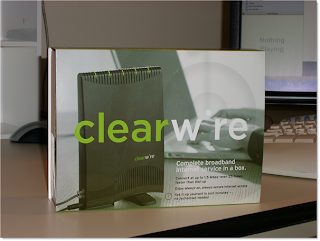 Clearwire needs to focus on building its customer base through content partnerships that people will consume on the road or in their car.  The company needs a lot more market and customer credibility as it tries to raise a new round of $1B in debt.  Here are ten partnerships and ideas that could help put Clearwire on the map with the average consumer:


Dumb wireless pipes need to start thinking more like Hollywood entertainment and Madison Avenue advertising agencies if they want to survive.  Now Verizon Wireless is getting into data business with their new 4G LTE network which will compete with Clearwire's WiMAX network. Also, AT&T and T-Mobile are speeding up their networks for smartphones using HSPA+ and the speeds are pretty competitive if not better.  Its probably about time that Clear management starts taking a more aggressive look at some new business models because their previously foretasted data card market is just not that big.
Clearwire trades under the stock symbol CLWR and has a market capitalization of roughly $5B dollars. The company has around 3,500 employees and the network operates in 61 markets. According to their corporate profile, they have 642,000 retail and 46,000 wholesale subscribers.  Annual revenues for the company are around $456M and they are still losing lots of money.
WiFi is a direct competitor to the company and it works pretty darn well if you are indoors. Clearwire WiMAX doesn't work very well while indoors and should offer easier ways of working with WiFi. Wimax needs WiFi especially when most of your media is consumed while you are at the office or inside your home or office.
By Syndicated Maps at 12/02/2010