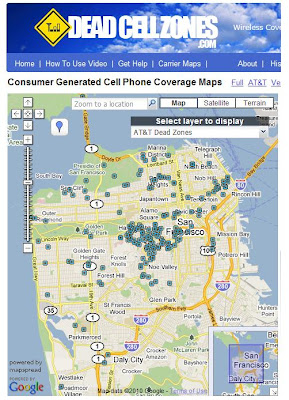 San Francisco has been awarded with the worst AT&T reception in the US according to our users.  The map above shows where customers have complained about dropped calls, data congestion and poor voice quality consistently and its only getting worse.  Search the AT&T Deadcellzones.com Consumer Generated Coverage Map by typing in your zip code or city name.  Ironically, one of the worst locations for reception is the AT&T building where Twitter's headquarters is. This building has very dense population of iPhones in the City and with 1.7 million iPhone 4 units sold in the first three days its not going to get any better.

AT&T Executives partly blame the San Francisco City Council and zoning laws, claiming that they are limited by 4 foot antennas.  I am not sure if I believe this excuse because back-haul, signaling and switching seem to be the carriers biggest challenge in other areas of the US.  Can AT&T make densely populated iPhone areas work properly with larger antennas and more fiber back-haul similar to SXSW in Austin?   AT&T executives claim that if they could put 6 foot antennas onto buildings that could would be better for all customers.  I would like to see a beta test in Downtown San Francisco of using larger antennas to test and see if it improved coverage. If successful, the San Francisco City County could use our database of complaints to measure the amount of complaints in an area as documented proof.

Also, we also think every AT&T iPhone purchaser (especially San Francisco) will eventually get a free 3G femtocell similar to Softbank in Japan when more competition starts to challenge their Apple monopoly.  AT&T's MicroCell may not be the complete solution to fix the problem but they certainly should not be charging for data or the device considering all of the complaints we are hearing about on their network.   Consumer reports across the country seem to be a very mixed bag about the AT&T MicroCell the tech capital of the World, San Francisco seems to be suffering the most. Some say the MicroCell works, some say it doesn’t (even when the network is up) and some say it drops calls all of the time.  The common issue seems to be interference with the Macro network and control for the signal is increasingly becoming a challenge for customers who are installing the mini cell phone tower.  Will AT&T stick with Cisco Systems as the MicroCell manufacturer or will they look for alternative femtocells?
Apparently, AT&T looks like they are being selective about who they are selling their new MicroCell to as well.  Apparently, TechCrunch is trying to purchase a MicroCell one but has been denied.  AT&T managed to sucker in two of the biggest names in San Francisco to purchase their new Microcell,  Facebook's CEO Mark Zuckerberg and Salesforce's CEO Marc Benioff.  Both could be great advocates  had AT&T's network been prepared but apparently there were problems.  Benioff posted on his Facebook:  “Bought 2 AT&T MicroCells and apparaently installation won’t complete. Called AT&T. They said they are having a national MicroCell outage since Friday. It won’t work for 2 more days." Zuckerberg wrote on his Facebook: “I got one and it seems to work pretty well." “Pretty well” isn’t exactly a rave review.