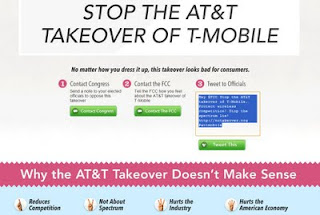 Here are 10 ways you can help stop the AT&T Takeover of T-Mobile?  The merger can be blocked if Government officials simply evaluate the AT&T & T-Mobile merger facts. The US Justice Department blocked the Nasdaq OMX Group (Nasdaq: NDAQ) proposed takeover of NYSE Euronext recently so the AT&T and T-Mobile merger can be blocked as well.   Here are two different ways you can help influence the decision-makers the Department of Justice and the FCC are just puppets.   FCC petitions to deny are due Tuesday, May 31st and opposition are due Friday, June 10th and replies to the oppositions are due by Monday, June 20th.

1)  Visit Notakeover.org to share your opinion about AT&T's takeover of T-Mobile with Congress and FCC.

2) Email the US Department of Justice at askDOJ@usdoj.gov.

4)  Fill out a form at the FCC and express your opinion on the merger.  This method will likely go into a black hole of nothingness because the FCC is a joke.

6) Attend public hearings on Capital Hill that AT&T is trying to block from public view.  Visit local town hall meetings and express your opinion to your local congressmen.  Charles Grassley the Senator of Iowa received strong opposition at this last town hall meeting from Iowa residents to block the merger.  You can do it to by expressing your opinion to representatives.

7)  Support and become a customer of rural wireless carriers like Cellular South, Iowa Wireless, Cellular One, US Cellular, Leap, Cincinnati Bell who may benefit from the FCC roaming agreement mandates.

8)  Support and send information to TV personalities like Jon Stewart, Al Franken & Jim Cramer and local news networks with facts and relevant merger information they can use to influence public opinion.

9)  Disseminate positive information about how T-Mobile can compete and survive on its own with the $3B breakup fee and spectrum.  Encourage the financial press and financial industry that T-Mobile could be a great IPO candidate.

10)  Expose the fact AT&T is the largest donor to Congress, corruption and conflicts of interest that lobbyist and the d>army of investment bankers have.


10)  Write a blog post and send us your article that we can publish on Dead Zones,  Public Knowledge or Huffington Post.
By Syndicated Maps at 5/19/2011