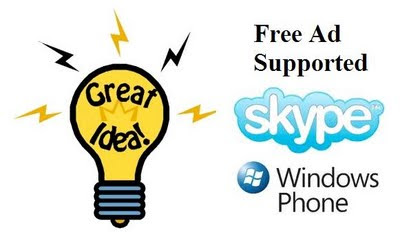 Microsoft made a great purchase of Skype to further their advertising footprint.  I think it won't be long before Apple iChat, Facebook, Microsoft and Google Voice start testing their ability to provide customers with free ad-supported phones. If you are a sophisticated smartphone or tablet user, you probably already know how to make WiFi phone calls on Skype, Google Voice or iChat. Ad-supported phones are only possible if you have the scale and reach to lots of people and can sell advertising against this inventory.

WiFi is growing much faster than 4G cell towers and data capacity can handle.  The only solution to eventual wireless armageddon in 2012 is unlicensed free wireless access that is in the hands of entrepreneurs and not the carriers.  Carrier networks were built for voice traffic and do not scale for massive amounts of data.

The reality is we talk on our phones about 90% indoors while we are standing still. So it is not inconceivable that consumers might want a WiFi-only phone. Ya but there where is the revenue in for the company? Its my belief that as CPM (Cost Per Thousand) advertising rates increase due to improvements in advertising technology that WiFi and phones will be ad-supported. Companies like Apple, Google and Microsoft will make more money selling against their customers using Windows and Android phones. WiFi can actually be more reliable than 2G, 3G and 4G in the vast majority of cases.  Service level guarantees are way overrated as we all know from our experience with AT&T Wireless 3G iPhone problems.
By Syndicated Maps at 5/18/2011