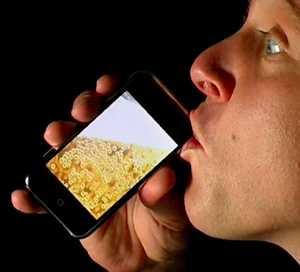 Hey, iPhone users you have all been "drinking the sauce" and supporting two of the biggest fraudulent marketing scams in US history: AT&T's Maps and Apple's iPhone Reception!  Users have reported that iPhone 4 can drop 4 or 5 bars when tightly held in a way that covers the black strip in the lower-left corner of the metal band.  Apple claims that the formula it uses for calculating signal bars has been wrong for years and that this is the cause of the iPhone 4's mysterious reception problems.


Apple: "Our formula, in many instances, mistakenly displays 2 more bars than it should for a given signal strength. For example, we sometimes display 4 bars when we should be displaying as few as 2 bars. Users observing a drop of several bars when they grip their iPhone in a certain way are most likely in an area with very weak signal strength, but they don't know it because we are erroneously displaying 4 or 5 bars. Their big drop in bars is because their high bars were never real in the first place."

This is a very suspicious admission from Apple and prompts more questions for AT&T: