How is Verizon's New 5G Home Gateway Any Better Than Fast Wifi? 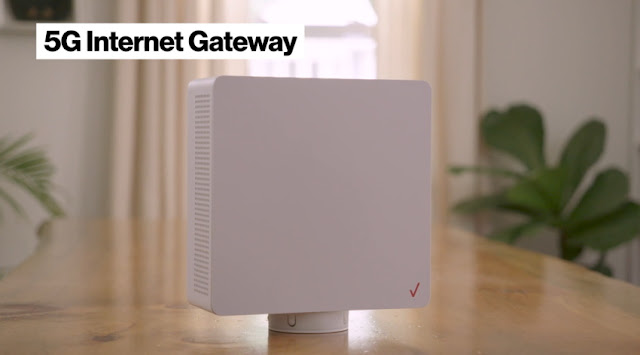 Is it true that in many cases it is faster and cheaper than the internet or “WiFi” from your cable or telco company?

Verizon 5G may be getting a lot bigger. Today Verizon exclusively revealed to PCMag that it's launching the first 5G home router powered by Qualcomm's long-awaited QTM527 antenna, which has the potential to greatly expand the range of the carrier's fast, but short-distance millimeter-wave 5G.

The new router, made by Wistron for Verizon, can be placed inside by a window, so there's no external install needed. A smartphone app guides you on where to put the unit. The device has Wi-Fi 6 and one Ethernet port. The Ethernet port is important because Verizon's millimeter-wave system is sometimes faster than the maximum speed of Wi-Fi routers; in tests in my neighborhood, I've gotten up to 1.7Gbps. Boulben said home users will get between 300Mbps and a gigabit.

For a while now, Verizon executives have been talking about this: the latest customer premises equipment (CPE) that is going to make its 5G Home fixed wireless access (FWA) offering so much more convincing. Well, it's finally coming to eight cities, including two new cities beginning on October 1 in Verizon's 5G Home Internet coverage area: Minneapolis and St. Paul.

The 5G Home Internet equipment, including a single-device 5G internet receiver and Wi-Fi router, was designed for the user to easily set up in their home. It comes in a single package and consumers can find the perfect location for mounting on a wall or window using a mobile app; the 5G gateway can confirm that a 5G signal is usable.

Wistron NeWeb Corporation (WNC), an Original Design Manufacturer (ODM) based in Taiwan, is the maker of the CPE hardware. Verizon announced that the home router is operated by the long-awaited QTM527 antenna from Qualcomm, which PC Mag first mentioned.

Verizon notes that including step-by-step instructions, all the user requires to install the unit is in the box. The operator didn't say how long it would take to set it up; during an earnings call in July, CEO Hans Vestberg suggested that he expected the self-installation to be less than an hour. It beats the old paradigm of waiting weeks for an installer to come into the home to set it up, although that didn't happen. Verizon is promising to do it for them for those who don't want to set it up themselves.

The company says that clients can expect average speeds of about 300 Mbps and maximum speeds of up to 1 Gbps, depending on the venue.

For Verizon subscribers, the cost of the service is $50 per month and $70 per month for non-Verizon subscribers. Verizon is tossing in YouTube TV for one month and Disney+ for one year for potential 5 G Home Internet users to entice customers. It also throws in a free Amazon Smart Home Package for smart home fans, which includes an Echo Display 5, Ring Stick Up Cam, Echo Dot, and Amazon Smart Plug.

In areas of Chicago, Detroit, Houston, Indianapolis, Los Angeles, and Sacramento, Verizon provides its 5 G Home Internet service, in addition to Minneapolis and St. Paul. The new equipment is available in all those cities except Sacramento, where the 3GPP 5G New Radio (NR) variant will be converted by customers in 2021.

Through this service, Verizon has said it plans to be in parts of 10 cities by the end of 2020. According to a spokesman, the 5G Home Internet product is designed to use millimeter wave (mmWave) signals at 28 GHz and 39 GHz.

"The new 5G Internet Gateway from Verizon is a game-changer for our customers," said Frank Boulben, Verizon's SVP of Consumer Marketing and Products, in a statement. "The extension of 5G Home Internet to new markets with new and enhanced hardware would provide consumers with the convenience and efficiency to enjoy more digital interactions and increased productivity from the comfort of their home, with people spending more time at home during these tough times."

Verizon suggested earlier this year that it would not wait for its 5G Home service to be completely baked, introducing an FWA service using its 4G LTE network. The LTE service helps the company to grow and develop beyond its Fios and 5G Home footprints into more rural areas.